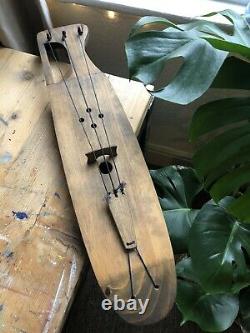 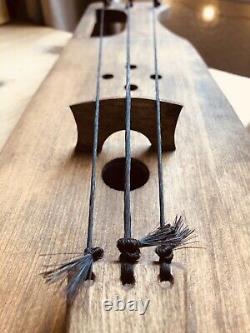 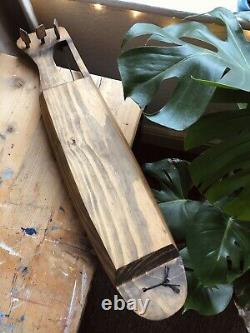 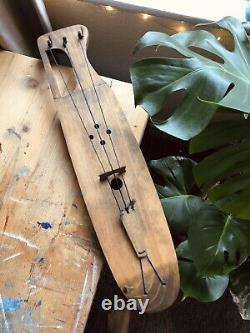 Jouhikko Alto Bowed Lyre - handmade by Ancient Music. Hoping to find a new home for this beautiful instrument where it will be played and enjoyed. Info below taken from the AncientMusic Etsy listing for this instrument.

This instrument is a Finnish Bowed Lyre, called in Finnish a Jouhikko (pronounced Yo-hee-'ko). The Bowed Lyre is an ancient instrument, played in Europe for at least 1000 years. Although eventually dying out across most of Europe it survived in Finland, the Shetlands, Sweden and Estonia as a folk instrument. This model I call the'Semi-Trad-Hikko', whilst being mostly traditional in form it incorporates some modern elements, such as sound post and bass bar and slightly larger hand hole facilitating an extended range and allowing the player to finger the bass string as well as play both the traditional way with the back of the fingers, or the modern style with the front. This instrument is an alto jouhikko, a little larger than standard and is designed to play in G, a little lower than the D normal sized jouhikkos are generally tuned to. I designed the alto jouhikko in association with the Finnish band Varttina for the Lord of the Rings West End stage show. It has since been popularised by Wardruna whose front man Einar Selvik plays one of our Alto Jouhikkos.

The body is carved from a single block of pine and a thin Swiss spruce tonewood soundboard added, to sound as traditional as possible, though a little louder due to the soundpost and bass bar. This makes the instrument suitable for musicians looking for that traditional warm, characterful jouhikko sound and traditional looks whilst being loud enough to play with other instruments.

It is strung with real black stallion horsehair and made to be tuned FCG with the middle string a C drone below the other two (standard jouhikko tuning), and played in G, though it can happily be tuned a little lower or higher and used in a variety of tunings. It has maple pegs, bridge and tailpiece, and plied linen cord tailgut. The item "Jouhikko Alto Bowed Finnish Lyre Ancient Music Handmade Viking Wood Instrument" is in sale since Wednesday, November 25, 2020. This item is in the category "Musical Instruments\Vintage Musical Instruments\Vintage Wind & Woodwind\Other Vintage Woodwind". The seller is "jess-hazel" and is located in Helston.

This item can be shipped to United Kingdom.